The Brymen BM885 is a combination of a True-RMS digital multimeter and an insulation tester. This makes the BM885 suitable for various applications such as troubleshooting or preventive maintenance. The BM885 is the slightly less extended version of the Brymen BM887. The BM887 has a higher ACV bandwidth of up to 20 kHz and is able to measure capacity and temperature.

On the 6.000 count display of this multimeter it is possible to accurately display AC and DC voltages. The meter can test up to one kilovolt of resistance. The meter has a dual-display function where two different measured values can be displayed at the same time.

The meter also has a number of other useful functions, such as built-in detection that protects against incorrect connection of the test leads and the meter can automatically set its range. Furthermore, the meter is equipped with a diode test function and a 61-segment bar graph that is updated 60 times per second, to show quick changes in the measured values.

This multimeter is supplied including: 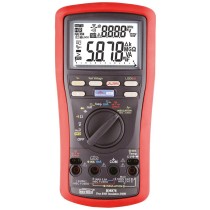